For instance, without mainstream media coverage by folks like Stephanie Simon at Reuters, I have little doubt that inBloom would still be in business selling out children’s data to not just the highest bidder, but any bidder.

My understanding of the inBloom business model is that they were meant to be in the business of charging schools to retain their data which they would then give away to businesses and other parties. They were a non-profit after all!

Apparently I have the House to Myself Until 3:30 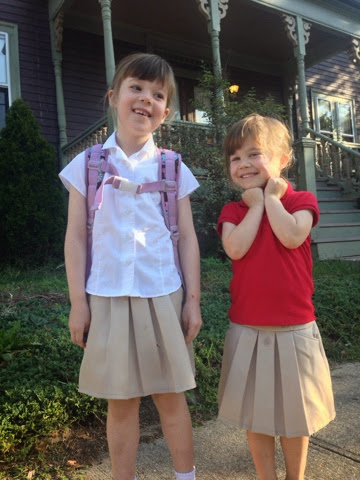 Posted by Tom Hoffman at 9:56 AM No comments:

The Thing About "Developmentally Inappropriate" Standards and Tests

For example, the number of times the average 3rd grader can bench press 300 pounds is zero. After a rigorous training program, it is still zero. Thus, it is a "developmentally inappropriate" assessment.

Posted by Tom Hoffman at 9:52 AM No comments:

The Role of Eastern Europe in the Semiotics of International Comparison

South Korea is on the reformster short list of Countries We Want To Be Like (right up there with Finland and Estonia).

Maybe I'm behind on the international comparison discourse, but my impression is that we're supposed to regard the former Soviet bloc as pathetically backward following the collapse of the Berlin Wall. Thus, any time we underperform Estonia, Poland, Lithuania, etc., it is simply an embarrassment.

This, of course, forgets that these countries have long intellectual traditions on their own, and in particular were no slouches in math and science under communism. There is no particular reason to think we should outperform all these countries in all areas of education indefinitely.

The original plan for this trip had us finding a small flat in Stirling, with Jennifer commuting to the campus a couple miles out of town by bus. This would have been a real Scottish immersion, but also pretty much moving across the ocean to go from one tatty Victorian neighborhood to another. As it turns out, it is hard to rent in Stirling if you aren't there, and late in the process we realized the uni was opening a block of brand new on campus family flats as part of an overhaul of its mostly 1960's era student housing, so we ended up on campus at Alexander Court.

The University of Stirling is not actually in Stirling (pop. 45,000). It is a couple miles north on the former Airthrey Estate. The university was built from scratch on the grounds in the 1960's. It is like a compact campus plopped onto one side of a nice old park, with 60's institutional architecture centered around a nice little lake. We're on the far side of the lake, past the 9 hole golf course and the rugby and football pitches, a full mile from the main entrance to campus.

Our three bedroom flat is fairly minimal, as you'd expect, but big for Scotland. The master bedroom has a nice workspace that I occupy, the biggest problem being that sometimes I realize I've spent about 20 hours of my day within a 6 foot square. There are a few conveniences for international families, including a TV.

Here's a peek into our flat while the finishing touches were still being put on last August: 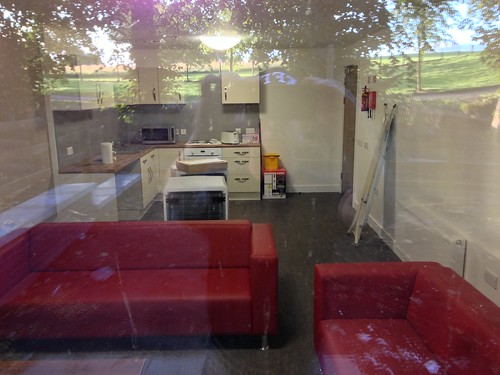 My current theory is that we lucked out by being the last family to request a flat, and the last one available was the ground-level handicapped accessible flat (which they'd have to keep open just in case). This gives us a glass door and full length window opening out onto a patio and garden, directly out onto the junction of a dirt road and several trails leading to campus, up to the pitches, into the woods or up into the hills. I guess you could say it is a high traffic neighborhood, but with mountain bikers and hillwalkers instead of the Honda Civics blasting reggaeton and unlicensed motorcycles we get in Elmwood this time of year.

There are eight other families living in this block: two from Malaysia, one from Iceland, Zimbabwe, Thailand, and Scotland, and Arab and Carribbean families. Mostly they all have early elementary or younger kids, so there hasn't been a lack of playmates for the girls. The rest of the students in the courtyard are mostly Asian grad students who were seen more than heard and barely seen.

After the end of the school year, Alexander Court hosts a variety of visiting groups, this year including members of the Team Scotland and event support staff preparing for the Commonwealth Games, a couple of pipe bands (including the Dunedin, Florida high school band), a bunch of karate enthusiasts and a group of spiritualists.

So from my point of view -- since I'm not the one studying here -- it has mostly been like living in a little managed apartment in a low-key resort for a year.

What is extraordinary about this place is the overall setting, in this strategic bottleneck between the lowlands and highlands, between the Pictish fire hill of Dumyat and the Abbey Craig, where William Wallace waited for half the English army to cross the Forth before falling upon them, next the ancient standing stone perhaps commemorating where Kenneth MacAlpin's Scots assembled in 834 to before the battle that united Scotland under one king. 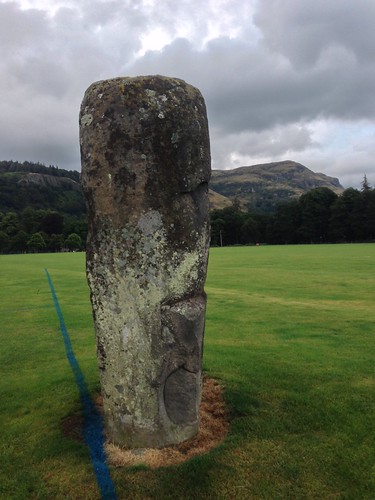 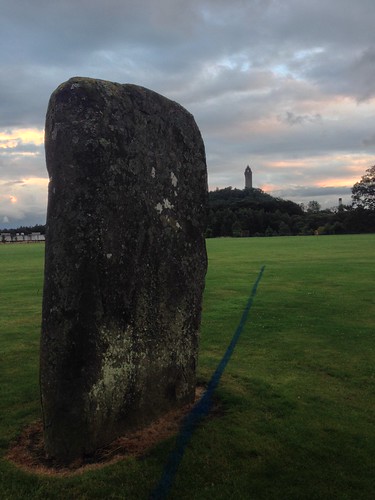 Posted by Tom Hoffman at 9:33 AM No comments:

The threat of firing is the great "Do this or else..." It takes all the powerful people a teacher must deal with and arms each one with a nuclear device.

Give my child the lead in the school play, or else. Stop assigning homework to those kids, or else. Implement these bad practices, or else. Keep quiet about how we are going to spend the taxpayers' money, or else. Forget about the bullying you saw, or else. Don't speak up about administration conduct, or else. Teach these materials even though you know they're wrong, or else. Stop advocating for your students, or else.

Firing simply stops a teacher from doing her job.

The threat of firing coerces her into doing the job poorly.

My parents taught in a small town, and I think this is easier to understand in a small town context, where everyone goes to the public school, and a career teacher may teach every child in the town for a generation or more. I grew up in a town of 8,000, and my father taught math to half the 8th graders in town for about 30 years.

So if you're a Democrat, you're going to get all the Republicans' kids. If you play for South Side, you've got all the Moose Club's players' kids. All the doctors, and lawyers, an professors; the drop-outs, perverts, meth addicts and child abusers, too. They mayor's kid, the principal's kid, the prison warden's kid. Everyone.

Some of these people, and/or their kids will not like you and would like to see you lose your job at some point. It isn't that hard to wrap your head around that teaching is a unique profession.

If Only Education Had the Rigor of Medicine

Today, the American Heart Association says that people with coronary artery disease should take daily fish oil supplements. Nutritional guidelines in the United States, Canada, and Europe call for fish twice a week. Yet for all the enthusiasm that has surrounded these famed fatty acids in the past few decades, their performance in clinical trials has been mixed.

Posted by Tom Hoffman at 6:27 AM No comments:

Standards are By Default Ignored

There was some hand wringing over the politicization of standards writing post-Common Core, with legislatures taking an even more hands on approach.

I would say the most likely outcome of this will be for schools to pay even less attention to standards. In 2014, that means just worrying about the tests, in the optimistic future, it means paying more attention to kids and the world around them (writ large). Even at the peak of Common Core-mania, people weren't focused on the standards.

This ends with the whimper of fat binders pushed into a high corner of a bookshelf.

Posted by Tom Hoffman at 6:14 AM No comments:

I had a Scottish Macaroon the other day. This is a pretty good description:

Well, today I present one of Scotland’s national sweets: the macaroon bar. It’s about a million miles from the French macaron. They both contain sugar and the names are a little bit similar, but that’s about as far as it goes.

The Scottish macaroon bar is something of tooth-aching sweetness. It has a snowy-white intensely sugary interior that has been dipped in chocolate and then rolled in toasted coconut. This is probably as bad as sweets can get (and a dentist’s worst nightmare) but it has a firm place on the heart of a nation that, well, loves just about anything that is very, very, very sweet.

You might also wonder where the name comes from – is this in any way linked to the French macaron? The answer is…I don’t know. But here in Britain, coconut macaroons are quite common, so I think it is the addition of the coconut that gives rise to the name. Just a hunch.

I don't think most Americans have "sugar junkies" as part of their stereotype of Scots, but man, do these people love their sugar. Of course, Americans do too, no doubt in part because we are in part Scots. Scots are worse... really! I mean, the opening ceremonies of the Glasgow Commonwealth Games featured an interlude of dancing marshmallow teacakes, not because of corporate sponsorship or anything, just because Scots love the things (they're awesome, really), and when they think "Ooh, what do we love about Scotland that we'd like to tell the world about?" Their minds wander back to sweets sooner rather than later.

Those macaroons... you might as well have a solid block of sugar the size of a deck of cards. You could cut the sweetness a bit by taking a bite of fudge. Yet, that's probably only a bit more than the calories in a 32 oz. Coke.

What's really nuts about this is while you have no trouble finding an adult Scot who could stand to lose 20 pounds, on the whole, Scots are clearly less fat than Americans. That is, anecdotally and statistically.

It is intriguing because you cannae attribute it to Scots making better choices or having any more discipline personally. Many Scots load up on fried food and sweets just as much as Americans do, but somehow we seem to end up even fatter.

Salon has 10 Reasons America is Morbidly Obese, which is a good start. The lack of high fructose corn syrup is also notable -- and tastier! It is hard not to feel like we've decide to dispose of the surplus byproducts of our agri-industy by just dumping it into our own diet, regardless of the cost.