Stirling Skaters are Breaking for "Yes" on Scottish Independence 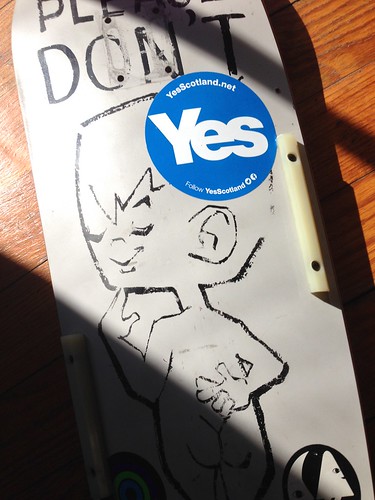 Given that we spend far too much on overly long, loud, and insubstantial political campaigns in the US, it was a bit difficult to get a gut-level feel for the progress toward tomorrow's Scottish independence referendum during my year there. For example, campaigning for the party nomination for Lieutenant Governor of Rhode Island -- a post truly devoid of power or responsibility -- is more visible in my neighborhood here (e.g., signs) than the independence vote was around Stirling when I left a month ago.

Not that there's anything wrong with that, but as an American I just kept thinking "If this is such a big deal, where are all the damn signs?"

Similarly, as far as I could see, I was the first person to slap a Yes sticker on his skateboard at the Stirling skatepark, and none of my mates there seemed very interested in discussing the matter. So about the only timely data point I can offer on the story is that on Facebook, the Stirling skate community has broken hard toward the Yes side in the past week. My intuition all year was that there just didn't seem to be the level of enthusiasm for Yes (e.g., can't even be arsed to stick up a wee sign) that would be necessary for such a momentous break. Now, it seems like there is real, late breaking momentum.

A couple other wee points: