On Sunday, November 9th 2014, Herb Neumann died. It was cancer that took him down. He was one of the toughest guys there was but just one thing was tougher.

I never met Herb in person. Over the years I learned a lot about him. He was a legend in the New Jersey/NYC area. He skated and rode bikes and did it all his way. He was the guy who would go bigger and go faster. He published his ‘zine Geek Attack back in the day when zines mattered. He skated vert and down hills, he rode road and mountain bikes. He designed his own skate trucks and numerous other parts for skates and bikes. He owned a skate shop, Skate Werks, and passed his passion on to the next generation. He was a special part of his community. Many people are in mourning today.

I hadn't actually re-located Herb online since I started skating again, or for that matter met him when I was reading his 'zine and skating in the 80's, but his perspective on skateboarding and, well, being a geek sure resonated with me at the time I was stitching together the various parts of my identity. I'd come across my cache of Geek Attack stickers while unpacking Saturday and stuck one on my current board. I guess that's in memoriam now. 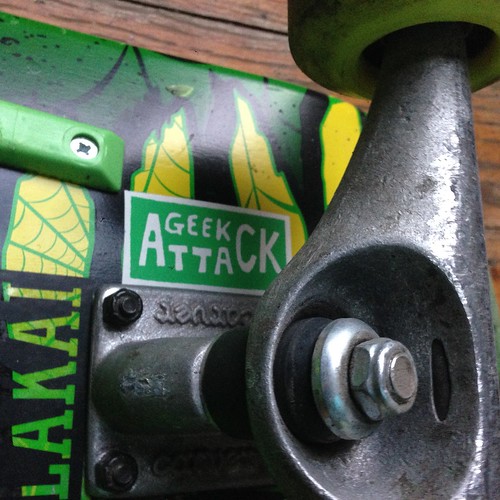