Get In The Van Girls, We're Going On a Punk Rock Field Trip! 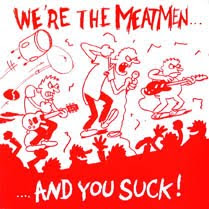 Tesco Vee: -- The Necros were supposed to play but they got stopped at the border because of all the studs and chains they were wearing. I was teaching school at the time and I remember I had my pants down and the microphone stuck up my butt at one point during the show and I was like, "I don't think I should mention this at school tomorrow."

Mr. Vee is going to be at Knight Memorial Library in sunny Elmwood tomorrow at 1:00 to talk and sign copies of Touch and Go: The Complete Hardcore Punk Zine '79-'83.

I saw Tesco and The Meatmen in State College circa 1986, didn't get the joke, and to be honest, still don't. But having him show up in Elmwood in a Saturday afternoon is to weird not to pass up.