I'm not really an awards person -- Black Flag never won a Grammy is pretty much all I have to say on the subject -- but sometimes these things come along by surprise, and at the right time. It has been a rough year for the Providence Grays, on and off the field. Everyone is suddenly getting older at the same time, and off-field traumas have switched from hangovers to one's child needing open heart surgery (which went well...). I've been plagued by minor injuries that kept me off the field much of the year.

So it was very gratifying that at last weekend's annual tournament Old Bethpage Restoration Village, the center of vintage base ball on the East coast, presented us with the first annual Joe Start Award, for "excellence in historical presentation and dedication to 19th Century Base Ball," as "Big Bat" said in announcing the award, "right down to their socks." 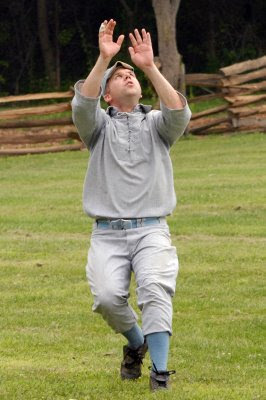 We also had a good weekend on the field, going 3-0-1 against quality competition. We always play well at Bethpage, where a dead balls, thick grass and an outfield that slopes uphill toward the fences favor aging but skilled teams.

Photo from Ray Shaw's 2008 Bethpage album. I'm pretty sure I dropped that one.

Congratulations to the Grays...

As I write this I'm looking up at my 2007 Providence Grays schedule card hanging above my desk... maybe you could send me the 2008 schedule and put me on the list for one next year. Also maybe you can stream a game next year... :-)

Well, like I said, it has been a rough year, so no fancy scorecard this year. Should have one next year, though.