If Districts Fought Back...

Instead, in case you were wondering, here's how AFPMA was included on this year's PPSDenrollment form: 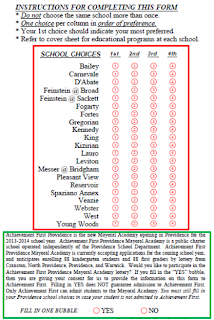 So keep in mind when you hear about the number of AFPMA "applications," most of those people also "applied" for four PPSD schools at the same time.

Nice use of red and green, as well.

Wow. Just, wow. And I say that as a professional graphic designer.

This has to a product of that six hour sit-down you wrote about.

What do Cuffee and Highlander make of this?

And Tom, this might be a silly question, but is Taveras' position on the AF board a conflict of interest (considering he appoints the Providence school board members)?

I doubt it bothers Cuffee and Highlander since it isn't like they have any lack of applicants, and in general making it easy to enroll in a charter isn't something we criticize.

In the context of this supposedly regional charter, it will skew the distribution (since the other smaller cities don't even do their registration this early, let alone add AFPMA as a checkbox. I'm guessing AFPMA will be about 90% Providence.

And it will be endlessly held up as showing the massive demand for more charters, when it is just a no brainer to check it just in case you don't get the rest of your choices from PPSD due to very bad luck.