Unless I'm reading this wrong, last year while Veazie Street School Principal Susan Chin was named RI Elementary Principal of the Year, her students were well on their way to posting the second lowest student growth percentile in math in the state (23).

Chin is considered one of the most successful leaders in Providence. A 26-year veteran of the Providence school system, Chin came to Veazie Street in 2007 when it was the worst-performing elementary school in the state.

Veazie Street is now one of the schools that is making substantial gains in English and math, among the highest in the state.

What does any of that mean? Who knows!?! 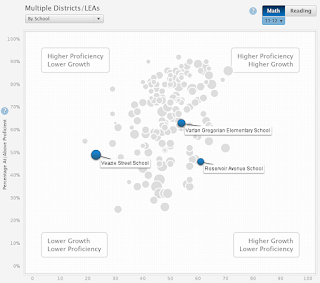 Anyhow, if you follow the link, I've highlighted Veazie, Reservoir and Vartan Gregorian Elementary. If you flip between subjects and years (above the graph at right), you can see how much the scores can jump around, and if you're actually comparing two schools, it can be pretty extreme. Veazie and Gregorian had the same reading SGP last year, and they're 25 points apart this year.