Thus far the growth of traffic on xochat.org has been fairly slow and linear, despite the link from OLPC News and the official OLPC community news (so go ahead and blog now if you'd like). 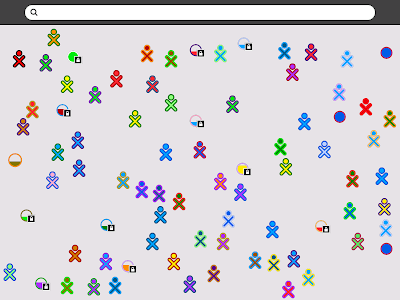 Bandwidth hasn't become an issue. I've got 200 gigs a month, and I can't see breaking that. There are definite spikes when someone shares a video with a bunch of people, but since there is a limited pool of users (compared to, say, the entire internet) and the video is only available as long as the creator keeps it open on his or her XO, it doesn't seem like the kind of massive runaway bandwith loads we're used to seeing when things go viral or get dugg or Slashdotted will occur.

I haven't rebooted the server since I put it up 10 days ago. I also haven't restarted ejabberd since the first day or so I had it running. Its memory consumption is slowly creeping up. My understanding is that OLPC ran into trouble with runaway memory consumption at around 150 users online. Note that the core ejabberd server can handle way more than that. There must be some problem with the OLPC extensions. Hopefully when I hit that wall I can set loose some erlang hackers to find the bugs. Also, at that point the XO's neighborhood UI should be pretty much maxed out.

Once things start breaking down, I'll cap the membership. I'll try to post at more length about the my perceptions of the sharing functionality for the XO's tomorrow, but definitely the buggy and incomplete nature of the collaboration tools has contributed to keeping the demands put on xochat.org relatively modest.

I just realized you're the Tom Hoffman of XO Chat. Thanks! This service rocks and is really brining together the G1G1 community.