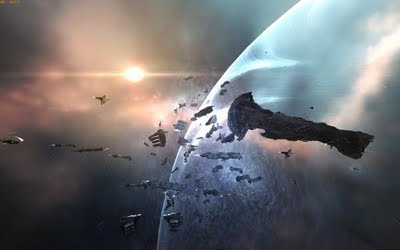 Ushra'Khan (and allied) fleet moving our heavy alliance assets (think, many space stations stuffed into immense freighters) to a new base of operations. About 130 pilots participated in this fleet, which was sufficiently secret that I had no idea it was taking place until after the fact. You're looking at literally thousands of dollars worth of internet space ships in that shot.