I thought it would be just useful since again, I don't think we spend enough time just reading the standards themselves, to actually look at a former New Hampshire standard and one of the new ones.

The old standard in New Hampshire said "Demonstrate initial understanding of a literary text by identifying, describing, or making logical predictions about the character or setting, problem/solution, or plots, or subplots, as appropriate to text; or identifying any significant changes in character, relationships, or setting over time; or identifying rising action, climax, or falling action."

There is, I think, a wealth of "right there" type of activities, and the idea of making a prediction as, to find out whether it is true or false. You'd have to read to find out, but that prediction is not necessarily rooted in the text.

The standard that replaces that in the Common Core Standards uses words like "analyze," or "develop," "interact," "advance." It asks students to not just identify but then to pull that identification(?) together and make that inference, to show how that inference develops, pushes the plot forward, pushes the setting forward, advances our understanding in that way.

We sometimes hear that the standards aren't rigorous enough, and I think sometimes that happens without having the standards in front of us. And, say what you want, there is something about a cleanliness, a cleanness about understanding the purpose of that as a teacher helping my students to analyze, whereas there is an awful lot of things to do right here that makes it sometimes challenging to process.

So we'll be looking at these standards today and working with this version of the standards, but I think it is useful to have that as a background.(8:50)

To be clear, the Common Core standard Dr. Pook references is this one:

CCSS.ELA-Literacy.RL.9-10.3 Analyze how complex characters (e.g., those with multiple or conflicting motivations) develop over the course of a text, interact with other characters, and advance the plot or develop the theme.

The big problem with Dr. Pook's illustration is that he does not cite the correct NECAP GLE standard used by New Hampshire, as well as Vermont and New Hampshire. The NECAP "characterization" standard is clearly this one:

The relevant NECAP standards are on page 9 and 11, if you want to see for yourself. 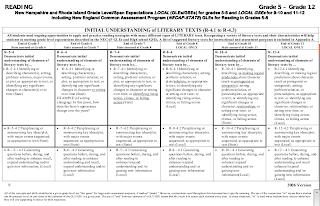 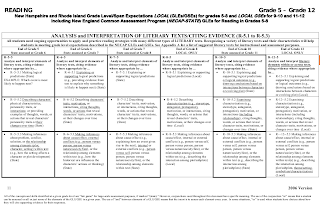 The standard Dr. Pook refers to is one of the heading of "INITIAL UNDERSTANDING of LITERARY TEXTS" The "characterization" standard is two pages later under "ANALYSIS and INTERPRETATION OF LITERARY TEXTS/CITING EVIDENCE." Those are the two main focuses of literary reading in the NECAP GLEs, and anyone with a passing familiarity with the standards knows the biggest focus is on analysis and interpretation.

We could certainly discuss which standard is better worded and conceptually stronger, but it should be clear that the two standards focusing on analysis of characterization are very close, both have notable weaknesses, but mean to address very similar points. They do not support an argument that there are significant differences between the two sets of standards.

We can logically infer from our reading that one of two things is true. Either Dr. Pook is unfamiliar with the NECAP GLEs and negligent in his preparation for this presentation to legislators in his home state, or he intentionally misrepresented the NECAP GLEs when illustrating the differences between the two sets of standards.