RI Race to the Top Application:

We analyzed individual schools and LEAs in Rhode Island that have produced dramatic student achievement gains of 10 to 20 percentage points over the past few years. These “proof- of-concept” schools, such as the International Charter School (in Pawtucket) and Rogers High School (in Newport), both of which are urban communities; exemplify our theory of action, with effective teachers and leaders working within a system of policies and resources based on student needs. They demonstrate the power of this strategy to produce extraordinary growth.

To be honest, I know nothing about Rogers High School, it is all the way at the other side of the state, that is, a 45 minute drive away, over two big bridges! I believe there may be a toll involved as well. Regardless, I have no brief or beef for them, aside from inherent West Bay Pride.

Anyhow, to find out more about Rogers and their extraordinary growth, I made the chart below. Rogers is blue, RI averages in gray. The solid line is first the reading interpretation and analysis proficiency rate in the old New Standards Reference Exam, followed by the NECAP reading proficiency rate (testing year). The dotted line is the reading scores for low-SES students (not available by school online until 2008). The dashed line is low-SES (i.e., economically disadvantaged) math scores. Note that I'm following the misleading RIDE date convention, e.g., the "2010" scores are for tests given in October 2009. 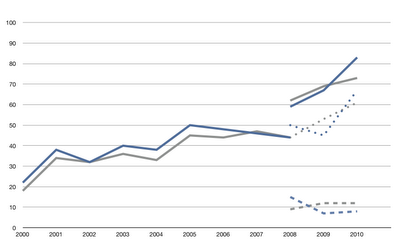 Basically, Rogers demographics are fairly representative to those of RI as a whole, about 1/3 low-SES, 2/3 not, and their scores up until last year have closely tracked the RI average. This year they got a nice 16 point jump in reading, while their low-SES math scores remained as dismal as their urban peers. Rogers low-SES math score is exactly the same as Central Falls'.