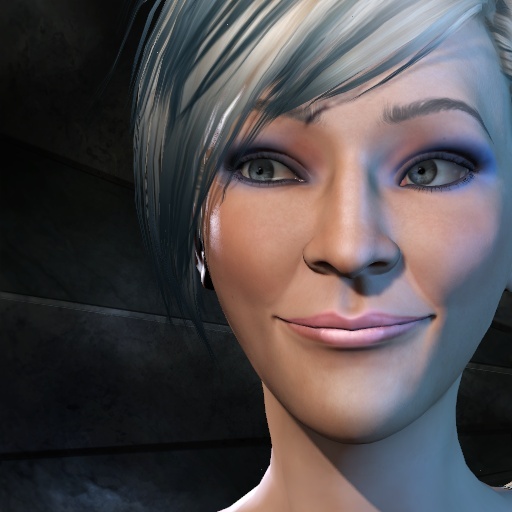 Voltairine is my trading alt. She's the daughter of a Gallente merchant with deep ties to Ushra'Khan and the Minmatar Rebellion and was roped by her father into spending some time after university helping establish trade in Ushra'Khan sovereign space, while we held it.

I'm happy with the model, but the pose and lighting make her look like a marionette. Later, CCP gave everyone a do-over on portraits made in the first couple days, so I toned down her makeup and hair color and came up with a new pose, which I'm pretty happy with. I don't have a copy of the first version and what you see above is the second one. Overall though, she has the "real estate agent in space" look I was going for. Doesn't she look like someone you'd like to buy a shipment of Shrapnel Bombs from?

Still later: I still couldn't stick with this, so I've given her a much more serious aspect in a later version, but I'll save this for historical purposes.

Does your wife know about this?

I actually started with a version that looked disturbingly like Jennifer, but there didn't seem to be an upside to that approach.