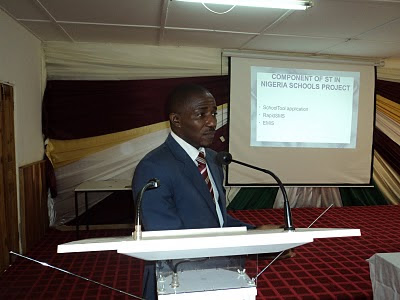 David Ally (pictured above) set up a meeing:

The meeting started as usual with brief prayer by two volunteer participants, this was followed up by the introduction to the high table some project stakeholders. The speech by the Acting Director General of NIEPA is enclosed, this was followed by the brief overview of other efforts in the education sector and how they relate to the SchoolTool Nigeria Project.

Dr. Akinsolu (a member of Ad-hoc project Team), NIEPA SchoolTool Nigeria Project Coordinator made her presentation on SchoolTool Overview emphasizing the usefulness of Cando and Intervention components. This was followed up with a tea break which lasted for forty five minutes.

SchoolTool Nigeria Project was presented immediately after the tea break, this session introduced the components of the entire program touching on SchoolTool application, rapidSMS application and EMIS. And showed how each component fulfils it objectives in the entire program. Much emphasis was on SchoolTool and how the modules that relate to teachers and students in SchoolTool modules help in solving some of the present problems faced in the data management efforts in the education sector. Participants were also notified that in order to undertake deployment in their states, that there are still financial gaps to fill in providing other resource components not covered by the present grant. Screen shots were presented during this session. This session lasted for an hour thirty minutes.

Lunch break was between 2pm and 3pm.

The breakout session comprised two groups in a round table having deeper look at the SchoolTool application and making inputs for any areas of deficiencies. The UNICEF Education Specialists pointed out the adequacy of the data kept on Teachers and suggested we leave that particular module as it is except for some few additions, other participants from the states also notified us of some policy framework in their states that would make implementation of the policy statements enforceable via software. There were contributions in this session bothering on development and bugs corrections. A separate list of input would be provided for the developers to work on. Apart from some bugs discovered in the demo application, other input requirements are for Teacher module, Year Posted to School, Photograph, State of origin, id-card, Salary Grade Level, etc

At the end of the break out session we got inputs from the two groups which form parts of pending development work to be sent to developers, some of the inputs relate to easy of use and layout of views but in all participants were happy about SchoolTool's feature sets. There were also comments on some related activities going on in some states but none of the on going efforts addresses the software need of the deployment but rather computer labs using solar, more than two states have this program going on now. 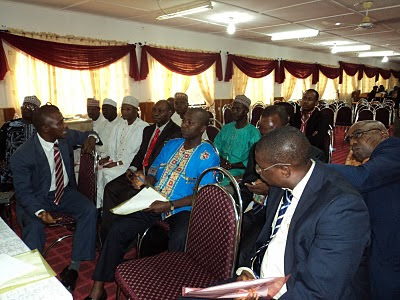 In other news, we got word that our colleagues in Cambodia are hiring a local manager to unstick our somewhat stuck initiative there.