We were up visiting the in-laws in Farmington, ME for Julia's birthday and Passover, so I took the opportunity to check out the area skate parks. Unfortunately, Farmington filled in its park at some point during the 20 years I was not skating, but I picked out three public parks, all about an hour's drive from Farmington and a half hour from each other, in a nice line: Bethel, South Paris, Lewiston.

I drove to South Paris first, along swollen rivers and waterfalls, thinking about how the very idea of small town public skateparks makes my social democratic heart go aflutter. Well, I got a reminder of why Americans hate their government. I arrived at 2:05 on Sunday afternoon; the park is locked behind a high fence at 2:00 Sunday afternoon. Why? Who knows? It looks like they've got a nice clover pool, albeit rather tight, but it is likely to be busy considering the limited hours it is open. 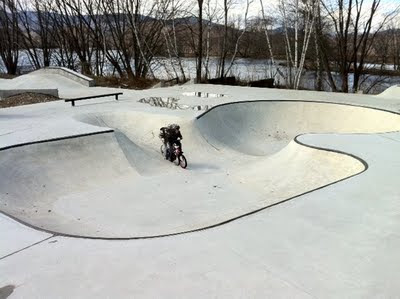 So I drove over to Bethel. It's the kind of facility that drew me back into skateboarding. A low-key little concrete spot in a riverside park next to a playground, bike path, etc. The little combi-bowl is a little too mellow for its own good -- it is the kind of bowl that it is difficult to actually stay inside if you try to do lip tricks or airs at speed. But for learning and practicing pumping and carving it is perfect, and I did just that on Sunday and Monday. Quite a workout, too. Pretty much a set of shallow squats every time I did a double figure 8 around the thing. Nice locals. The only disappointment is that the prep-school kids from Gould Academy seem to be more stylish skaters than the townies.

On the way home we made a quick stop just to look at the Lewiston Park. It is serious business. It's headline feature, the big capsule pool, is "I'm going to need bigger kneepads" deep. 12 feet? 9? I don't even know. The nice thing is that while back in the day big vert meant getting the nerve up to tail drop in from the deck of someone's backyard halfpipe, ready or not, now there's a nice run of smaller connecting bowls and banks that deliver you into the bottom of the big bowl at speed. So when we return for a longer visit this summer, I can just hit the biggest backside carves I can manage on that huge roundwall without needing to plunge in from the top.

Something to look forward to.