Got the Truck Up On Blocks 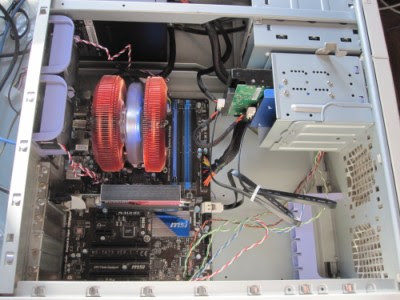 My work PC is about 11 years old. Or at least the case is. I've been incrementally upgrading bits as they broke or became bottlenecks, but trying not to just gut the whole thing has kept me lagging a generation or two behind, even when I got new stuff. In the past few months, web browsing had become intolerably slow, so it was time for a complete overhaul.

I would have preferred to just buy a compact, silent, low power box equivalent to a Mac Mini, but I must have multiple monitor support, which isn't considered a basic feature. So I ended up taking on what seemed like an archaic process and rebuilding this thing from parts.

So I was able to get a fanless power supply and video card, quiet new case fans, and a giant (quiet) cooler for the i5 CPU. I also ended up mounting /usr on a solid state hard drive I'd bought for ARM server experiments, with everything else on a conventional drive.

In the end, the performance is actually a lot better than I expected, and it is almost silent. So I guess I'm glad I did it the hard way.

This from a man who plays baseball bare-handed while in a wool suit in the dog days of August.