Given Mark's apparent endorsement and my general Squeak explorations lately, I decided to take a little time for my semi-annual "what can I get Croquet to do now" sessions. Generally, the results have been "not too damn much," although mostly because of OpenGL problems and general lack of documentation for getting it running on Ubuntu. With these tips, I got the 1.0 SDK running properly and managed to open up multiple instances where three avatars are sharing the same world. In this world, everyone happens to be a white rabbit. Of course the idea isn't to have three instances running on one computer, but to do the same thing over the network from multiple computers, which presumably also works. What makes this different than, say, Second Life, is that there is no server and the code is open source (among other things). 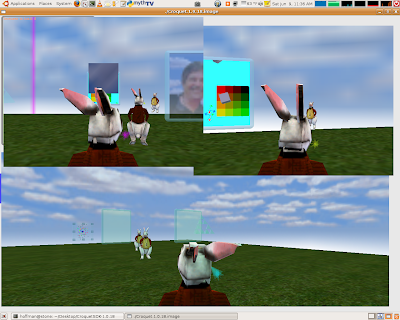 So, while I can't do anything useful yet, and Croquet is still quite buggy... progress!