The Cat Came Back

In the first 11 years following Kitty's adoption of Jennifer and I -- we didn't know this was a long-term relationship and thus, she's just Kitty -- she enjoyed perfect health. We never even took her to a vet until she developed a lesion on her breast, which turned out to be an aggressive form of cancer. The tumor was removed but the prognosis was grim. However, the cancer has not returned in the subsequent 14 months, which is way outside the bell curve of typical results for her type of cancer.

However, shortly after her original surgery, Kitty developed a benign growth on her jaw. We didn't want to go through the trauma (for her) and expense (for us) of removing it because frankly, we expected her to be dead in a month. In the following year, it grew and spread down her neck and pushed into her mouth, making it difficult for her to eat and making the surgery required to remove the tumor increasingly difficult. Finally, we decided to try surgery. I couldn't quite bear to simply wait until Kitty couldn't eat and put her to sleep.

Or neighbor, Dr Cathy Lund, is our vet. She runs City Kitty, a kind of high-end hipster cat clinic in the Jewelry District. She and I were both unsure if this was going to work. Removing an invasive tumor from a cat's jaw and neck can't be easy. I almost called and canceled the surgery, but finally took her in Wednesday morning.

Kitty now has an two inch incision running from under her lower lip about two inches down her throat. And she's walking around the house, eating, and generally acting more confortable than she has in months. There are still about a half-dozen axes hanging over her head, but for the moment, just a remarkable display of surgical skill by Dr. Lund and resilience by Kitty. 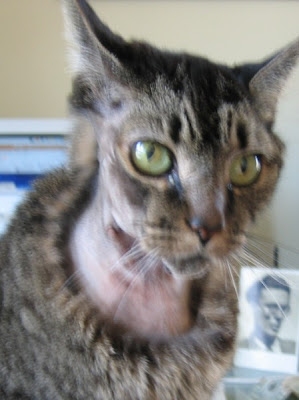 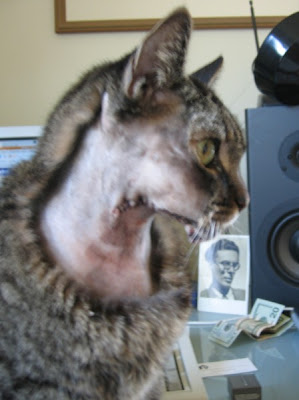 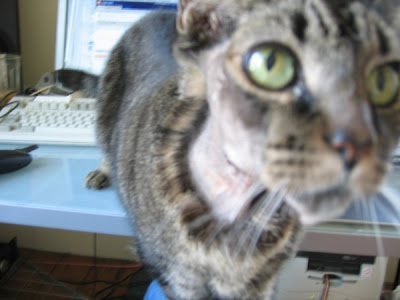 Here's to a speedy recovery.

Nice to hear Kitty is doing well...
You win the touching and heart warming post of the day award...

I thought I won that every day!?

Great! All our best for her speedy recovery!