The "massive injections of financial assistance" to the poor in the United states have obviously been insufficient.

Is there some country that provides more than the U.S.? That is doubtful.

This is an illustrative graph, from Worthwhile Canadian Initiative:

As you can see, every country but Ireland spends more on social services as a percentage of GDP. This is from 2002 OECD data. If you prefer looking at colored maps, Wikipedia has one, and the 2001 data in tabular form.

Or to flesh it out in more narrative form, here's a good description of Denmark's approach:

Another important measure of overall economic health is GDP per capita, which in effect approximates the wealth generated per person per year. Here, the United States remains near the top of the developed world, at $39,732. Denmark, though also in the top fifth of the oecd, is at just $31,932. It's a significant difference, but one that reflects, in part, the fact that Americans simply work more hours, don't get as much vacation, and can't take such generous pregnancy or sick leaves. GDP per capita is also an average, pulled up by the extraordinary wealth of America's elite. Once you consider the distribution of income and material goods, it becomes apparent that typical citizens in Denmark are doing as well as--and quite possibly better than--their American counterparts. Nearly 80 percent of Danish households have access to a home computer, the second-highest proportion in the world; just 62 percent of U.S. households can make the same claim. And, while the United States scores a bit higher than Denmark on the U.N. "Human Development Index," which combines financial standard of living with measures like knowledge and life expectancy, Denmark bests the United States on the "Quality of Life" index, which the Economist Intelligence Unit devised to measure a similar combination of factors. One reason Denmark scores so well is that programs like universal health care and day care mean middle-class Danes don't carry around the same sort of anxieties that their American counterparts do. The existence of such programs also helps explain the most obvious economic difference between Denmark and the United States: America's poverty rate of 17.1 percent is the second-worst in the oecd, behind only Mexico. And Denmark's? It's 4.3 percent, tied with the Czech Republic for the best on the planet.

Or, as Aurvig-Huggenberger of the Danish Confederation of Trade Unions puts more pithily:

"The big difference between the United States and Denmark is you put an emphasis on individualism vs. the collective," she says. "We have no working poor. There are no kids living in cars with no child care. We pay high taxes for it. But in the end, how much money do you need?"

Now, it is difficult, if not impossible, to come up with an apples to apples comparison of the value of the total social services offered to low income citizens of different countries. For example, what's the relative value of Medicaid compared to Danish or Swedish public medicine? If a procedure costs twice as much in the US as in Denmark (or vice versa), have you received twice the value? How do you account for the aggregate value of the universality and consistency of universal medical care compared to a program limited to a subset of the poor? If one country gives $10,000 to one person and $0 to the second, and another country gives $6,000 to both, which is more generous?

I did come across with an OECD graph which I think tells the truth about how social welfare spending plays out in real life: 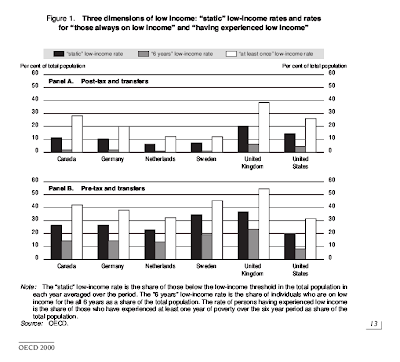 What this graph shows is that before taxes and transfers, other OECD countries have higher low-income rates than the US. After taxes and transfers, all but the UK have significantly lower low-income rates. Whatever the absolute costs of these transfers, what Canada, Germany, the Netherlands and Sweden are doing is more effective. This resonates with what I've observed traveling around Northern Europe and living in the US.

I believe the conventional wisdom: that Europe makes a greater investment in social welfare at a greater cost. If you want to know what a "massive injection of financial assistance" looks like, look at Europe. Compared to the rest of the developed world, we're experimenting with what happens when, as a country, you spend less on social services. However, if Ken can prove that wrong and demonstrate to me that a European-style welfare state is in fact cheaper than ours then well, that'll make me really happy, because it makes the argument for those programs even stronger.

Surely, you meant "Compared to the rest of the developed world".

Thanks Albert. This must seem like a deeply weird, and incredibly obvious, discussion to you.

These cross country comparisons are very problematic because the economic systems and conditions are so different.

Here's an analysis from Timbro that looks at the picture from the perspective of relative GDP, taxation, and consumption and comes to the exact opposite conclusions as to whose poor are worse off.

I suggest reading the whole thing.