I did a little tabulation of the Providence Public Schools' 2009 high school NECAP data, and the results are pretty striking. There's plenty of fodder for analysis, which I expect to break down in some subsequent posts, but here are the numbers and my brief, subjective, Feinstein High School centric and not even necessarily well informed descriptions of the schools involved.

For those who don't know, I was a member of the Feinstein High School (re-)design team and worked there for a few years as technology coordinator and teacher. My wife still teaches history at FHS.

This list excludes charters, etc. We're concerned here with the internal dynamics of the PPSD here. 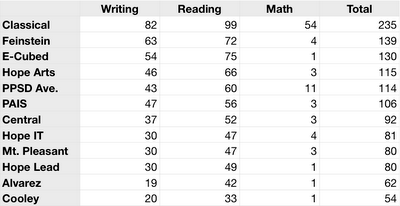 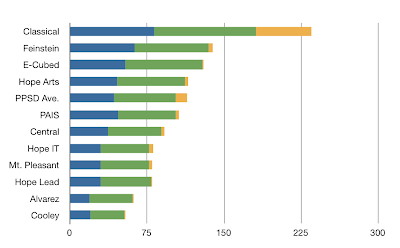 In case you're wondering, in the schools other than Classical, the basic procedure is students may request their top two choices citywide, with a lottery if they're over-subscribed, and if they don't get into them then they're assigned another school based on proximity. The small schools are all as much "neighborhood schools" as the big ones.

Also, after reading the above it might be a little more clear to you why I get so frustrated with "OK, now we're going to shake things up in urban education" rhetoric. I live in Providence, I'm focused on high school reform, and eight of the 11 schools in the list above were either entirely new or were comprehensively reconstituted in the 10 years I've been here.

I'd be careful with how you present your numbers. Those numbers, if I'm not mistaken, are *percentages* of students scoring proficient or higher in each subject. Adding up percentages in this way, especially when they reflect different data points, is not all that meaningful as a comparison.

If you want to compare NECAP, it's probably best to compare each subject area separately, whether you're using percent proficient or some other data point like mean scaled score.

All the data is right there in the table, dude.