What Should You Expect from a "Turnaround"

Angus Davis says with enough backing and effort, "Central Falls could go from worst to first." Unlike Davis, Deb Gist eschews the use of her favorite cliche and suggests "steady gains in student achievement."

Mass Insight gets more quantitative. The first of their "12 tough questions for states" asks:

Has your state visibly focused on its lowest-performing five percent of schools and set specific, two-year turnaround goals, such as bringing achievement at least to the current high-poverty school averages in the state? 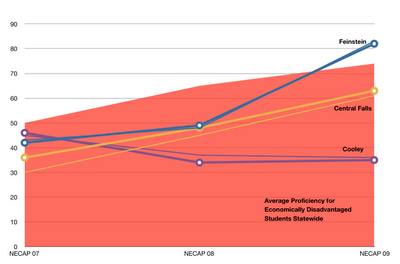 In the above graph, the red background is the average proficiency rate in reading plus math for economically disadvantaged students statewide. This is slightly different (from Mass Insight's "current high poverty school averages," but could well be higher depending on how you're calculating it (e.g., do you scale by size of school, etc). Against that are graphed the same data for the three RI high schools designated for intervention. The thinner line is the school's rate for their economically disadvantaged sub-population All the schools discussed here are 80%+ poverty schools.

Feinstein High School is of course notable for having already achieved Mass Insight's definition of a successful first phase turnaround prior to being turned around. The bottom slot is covered by Cooley High School. I don't know that much about Cooley, but it seems to come out as the runt of the litter of Gates-era small schools, lost its original principal to the Hope High turnaround, and from the numbers at least, genuinely seems to be going in the wrong direction.

The now famous Central Falls High falls decidedly in the middle. They're not quite closing the gap fast enough to meet Mass Insight's target by the 2012 NECAP's, but it is close. They need to go faster, but these scores don't reflect the results of this year's significant restructuring within the high school. Central Falls is a borderline candidate for radical turnaround. It is not a "this couldn't get worse" case. 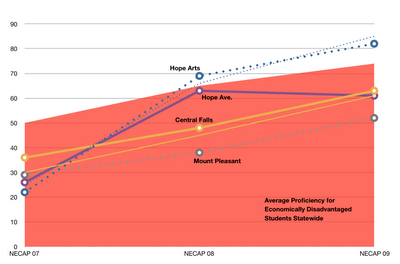 The purple line is the average achievement across the three (now two) small schools that Hope High was divided into during a major restructuring by the state, which included making all teachers re-apply for their jobs and hiring candidates from outside the district. Like Cooley in 2009, they started out at about half the proficiency rate of the state average for low-income students, well under Central Falls. In aggregate, they've basically caught up to Central Falls. That is, a major state intervention yielded slightly greater relative gains but not greater absolute achievement than Central Falls doing their regular administrative churn.

The exception to this within the three schools created by the turnaround is Hope Arts, which has broken through to meet Mass Insight's target. Given the district and state's inability and unwillingness to continue the reforms at Hope Arts, their capacity to sustain this is in question.

My main conclusion from all this is that Mass Insight's target feels right. To people outside urban education, it probably sounds absurdly unambitious, and it certainly isn't the end goal. But turnaround isn't really about turning ok but not great schools into great ones. It should be about turning schools that genuinely aren't working into ones that are doing right by the large majority of their students. It isn't about "worst to first," especially if your selection criteria don't even accurately identify the "worst."