This is getting close to the definitive info-graphic to illustrate my perspective on public high schools in Providence circa 2009 (click on the image for the full size version): 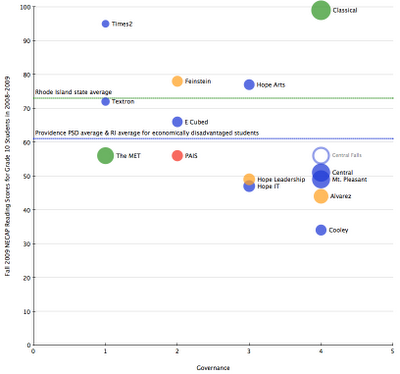 On the x-axis, the values correspond to:

Area of the dot corresponds to the number of juniors taking the test. This gives you a somewhat distorted sense of the overall size of the schools since a lot of students in the lower performing schools never make it that far. Classical has the biggest junior class (240) by 32, but I think it is smaller overall than Mount Pleasant by a couple hundred.

The colors correspond to economically-disadvantaged rates:

I also added in Central Falls High School just for reference. It is the third state high school to be turned around for Race to the Top, along with Feinstein and Cooley. As you can see, there are five other Providence high schools below Central Falls.

I decided to focus on the reading scores because the math scores are kind of useless since everyone other than Classical and Times2 is at 7% or under. It doesn't add much for comparison but makes the schools look worse than they actually are. And unlike the 2008 scores, there's nobody with writing scores mysteriously out of line with their reading scores.

The main thing now is adding commentary to the graph.