Where the FHS Students Ended Up

When Feinstein High School was closed, most of the students were sent to other south Providence neighborhood high schools. According to federal regulations, all students from schools closed as part of the federal SIG grants were supposed to be sent to higher performing schools. Here's the latest NECAP proficiency rates of south and central Providence high schools, showing students attending the school in the 2009-2010 school year (with the test administered in October 2010). 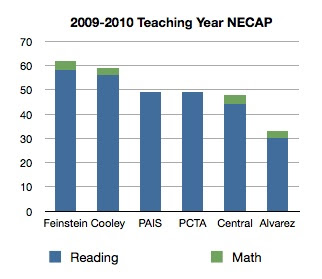 Yep, FHS is still on top of that list, even after its own death. E-Cubed and Hope Arts are a point or two higher, but on the other side of town -- and can't really be considered to be significantly higher performing in the most recent data.

And, yes, I'm ready to give this a rest.