Action Research on the Tools of Ignorance 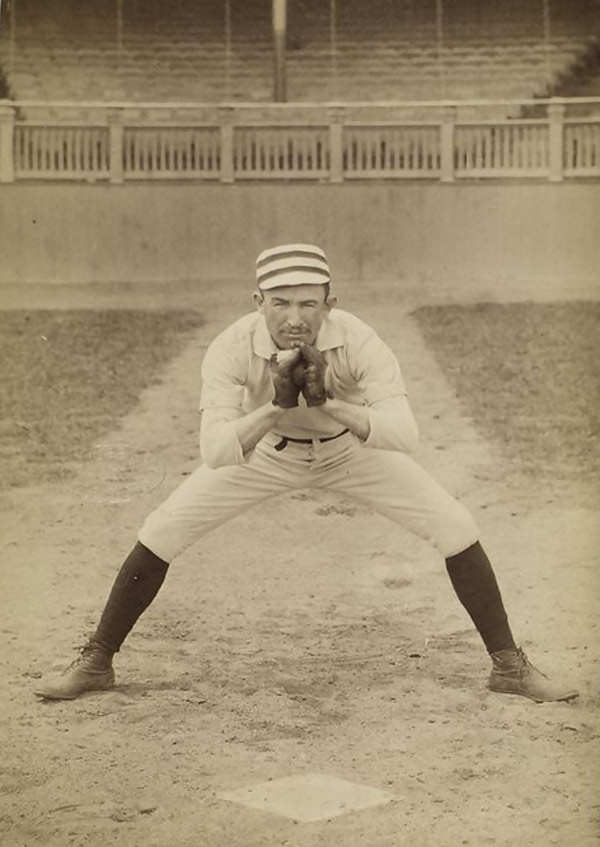 Like most people who have spent time studying and playing 19th century base ball, I have some clear opinions about how the position of catcher was played in the period. I try not to be too emphatic about sharing them with our catchers, though, because it is a tough assignment to get through at all, let alone with a coddled left fielder nit picking your form. Also, the Grays for many years enjoyed the services of Gil Faria behind the plate, acknowledged by all who had the pleasure of seeing him to be the greatest 19th century catcher since the 19th century.

However, Gil is now semi-retired, and we've been limping along with Charlie Dryer, his bad knee, and his hernia behind the plate. Charlie's sense of self-preservation is not well developed. However, he had a finger bent all the way back last game, and finally seems discouraged by ongoing pain in his hand.

With no serious intent, I donned the catcher's mask and gloves (full fingered heavy but unpadded glove in the left hand, fingerless in right) and got behind the plate to play a role in some baserunning drills at practice Sunday morning. Much to my surprise I felt quite comfortable. Thanks to my new skateboarding muscles I could settle into the correct stooped half-crouch used in the period (as pictured above), and since I actually used the correct two-handed catching technique, it wasn't unduly painful.

Some players catch with their fingers pointing toward the ball, but such men are continually being hurt. A slight foul-tip diverts the ball just enough to carry it against the end of the fingers, and on account of their position the necessary result is a break and dislocation. but with the hands held [properly] there is a 'give' to the fingers and the chances of injury are much reduced. For a low ball the hands should be held so that the fingers point downward, and for a waist ball, by crouching slightly it may be taken in the same manner as a high ball.

This is the technique it is difficult to get modern "vintage" catchers to embrace, and they subsequently tend to get hurt. On Saturday, at Moses Brown (double header starting at 11:00), I'm going to see if I can pull it off with the correct form.

This is the baseball equivalent of running with the bulls. Well, our likely starting pitcher is pushing 50, so it might be more accurate to say it is like running with a somewhat old and slow selection of bulls. Nonetheless, the only thing you can do in baseball more dangerous than mid-1880's (pre-mitt) catching of overhand pitching from 50 feet is mid-1870's catching with hard submarine pitching, fingerless gloves and no mask. As far as I know that has never really been seriously attempted by contemporary teams.

I may also have to model my throwing on a contemporary account of author Steven Crane's technique circa 1890 (from Morris):

He would not stand on his two feet and snap the ball down to the base. It was necessary for him to throw off his mask, cap and protector, give a hop and a skip an throw with a complete body swing. The strain upon the ligaments of his shoulder would, at times, cause him to double up with pain.

So... we'll see how it goes. I may last an inning or the whole game. Hopefully someone will get some video.

More of (and on) this please.