O.G. Kevin Faria and I rolled up to the world headquarters of the Huntington Base Ball Co. in Norwell, MA, where William Peebles has been creating high-end 19th and early 20th century base ball equipment since 2009.

William comes at the work as an artist and collector; Kevin and I brought our background in research and play from the vintage base ball perspective.

The most obvious difference in points of view is that, as far as William knows, nobody has ever actually played a competitive game with any of his products, whereas the Grays have been playing 1884 National League style base ball longer than anyone else, including the real 19th century players, whose equipment, rules and techniques continued to change rapidly.

Also, on the whole, the vintage base ball community tends to emphasize textual research (at best), primarily relying on rules, catalogs, newspaper accounts, etc. William is steeped in the collector market and, in addition to having a solid textual foundation, has an exhaustive knowledge of seemingly every early base ball artifact traded or displayed in recent memory, including lots of first-hand observation.

Finally, William's work is priced for collectors, not players, so on the whole his products aren't going to be used by most vintage players on a day to day basis. They're too expensive. If you are confused by this I'll just refer you to some graphs on income inequality in the US. There are certainly people who can pay $650 for a cool handmade baseball tsotchke without batting an eye. 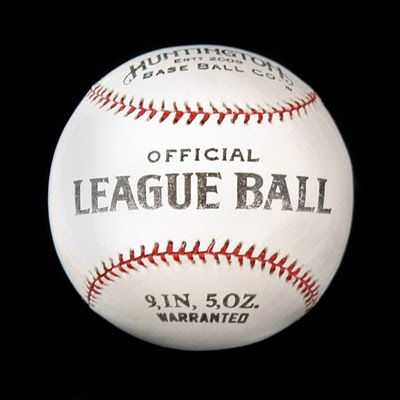 Balls were the primary motivation for the trip. No mass-produced ball priced for regular play can compare to William's hand-crafted, thoroughly-researched models. On the other hand, at $50 or more a pop, this is strictly a special occasion ball. The quality of William's covers lives up to both the price and the right occasion. What we don't know is how they play. The core is basically a modern ball with a cushioned-cork center. The construction is actually closer to the 1884 than the reproductions that 19th century base ball teams, including the Grays. The only problem is that the core should be all rubber instead of cork in the center.

1884 balls were essentially as hard as modern balls when new, and in particular everyone I know who has actually held a ball from the period for comparison vouches for this. The real question is how quickly the ball should soften. They used one ball per game in 1884, and the ball changed quickly enough that batting first was considered a tactical advantage -- a crack at a new ball was better than last-at-bats. William did have a ball that he uses to play catch and without even being hit by a bat it felt slightly mellower.

So, basically we need to just try playing a game with a Huntington ball and see how it goes. If it seems to hard, plan b will be for us to try winding a ball by hand, with a proper rubber core and seeing how it plays.

The most interesting thing we learned while discussing what exact ball design would be best for a Grays game is that while the Spalding catalog and box art through the 1880's continued to show very tiny stitching used in the 1870's, the surviving Spalding balls from the period had much sloppier, broadly spaced stitching. The quality went down in favor of quantity. The good news for us is that it cuts the price for us since the later balls were easier to make. Also, William will offer volume discounts off the list price for teams looking to buy a half-dozen or a dozen.

It is a lot to pay for a ball that lasts one game, but I don't think I'll be the only vintage base ball player who would love to have a near perfectly historically accurate game-played ball as a souvenir of my years in this crazy pastime.

William also makes a variety of reproductions of very early gloves as used from the 1870's through the 1890's. It is a strange period for gloves. Base ball had a very ambivalent, if not hostile, view toward the adoption of gloves, so none of these mostly fingerless gloves has a particularly revered status to live up to William's reverent creations. But basically, if you have a particular interest in any or all of these gloves, I don't think you'll find fault in these reproduction's execution.

For what it is worth, I didn't think there would be any significant difference in performance between William's fingerless gloves and cheaper alternatives.

What we were really interested in was the "1890's Tipped Finger Catcher's Glove." With at most minimal changes it could be used with few qualms back to 1884. These gloves are painstakingly constructed through a combination of hand and machine sewing. They're gorgeous, and certainly struck Kevin and I (unfortunately none of our catchers could make it) as quite functional. At $650 a pop, well... we may never find out for sure. William is open to creating a functional version with less hand stitching that would be... somewhat less. If you did pay $650 for a pair of these, you'd feel like you got your money's worth.

Bats... William had some prototypes by Bill Rayburn of the Rayburn Bat Company that he hopes to have for sale soon. My reaction was "I WANT." Actually "I WANT AND WILL NOT LET ANYONE ELSE TOUCH." I'm not going to try to articulate exactly what triggered that reaction, beyond a very high level of craftsmanship and finish that seemed completely in tune with the actual period bats I've been able to handle. These will range from around 50% more to double what the typical bats used for vintage play cost, but they don't seem like they'll break easily, so for a team to invest in one or two of these beauties does not seem unreasonable.

For all of William's attention to detail, there was one glaring weakness to me -- he lays out his packaging with nice graphics and typography appropriate to the period and then just prints it with a modern printer. So I turned him onto Dan Wood, and hopefully he'll soon have proper letterpress boxes, and everything will be perfect.

I'd like to thank William for taking the time to show us his stuff, and I hope we'll be able to follow up with some reviews of how the balls and bats perform in a game later this season!